The owners and team of staff at Brend Hotels are celebrating today after their stylish collection was named Hotel Group of the Year at the prestigious AA Hospitality Awards 2015/16 in London.

The AA has long been a leading authority on the top hotels and restaurants in the country. These awards are highly sought after and Brend Hotels had to beat off stiff competition from hotels right across the UK.

Brend Hotels was presented with its award at a glittering ceremony at Grosvenor House in London, hosted by TV presenter Fiona Bruce and with a special menu created by top chef Nathan Outlaw.

With its head office in Barnstaple, the family-owned group consists of 11 hotels in Devon and Cornwall, including the Carlyon Bay Hotel, the Saunton Sands Hotel, the Imperial Hotel in Barnstaple and the Victoria Hotel in Sidmouth. The group was founded by Percy Brend in 1955 and has remained a family business ever since, going on to become one of the top 150 employers in the South West

The award judges were very impressed with the quality of the facilities and the dedication and enthusiasm of all the staff at Brend Hotels. The company prides itself on the outstanding customer service and personal attention that it offers its guests, with many of them describing its hotels as feeling like a 'home away from home.'

"It is a real honour to be recognised in this way by such a prestigious organisation as the AA. We are thrilled to receive this award, which is a testament to the incredibly high standards our team achieve every day. At Brend Hotels, we are totally committed to one thing - making sure our guests have an amazing time!"

10 reasons to book direct with us! 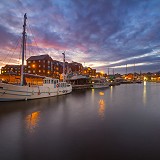 Bed and Breakfast from £100 per room per night | Experience a short but sweet Devon experience with a weekend break at The Devon Hotel. Click Here!